The Hideaway Island Resort and Marine Sanctuary is situated in Mele Bay – 20 minutes from downtown Port Vila (including a 5 minute ferry ride from the main land).

Surrounded by clear turquoise waters and coral reefs, Hideaway Island is one of the few places where you can hand feed hundreds of “tame” brilliantly coloured fish in a safe protected area, right from the beach.

A day on the island can be as busy or as quiet as you want to make it. As well as snorkeling and scuba diving, you can try sailing and beach volleyball, reef fishing, visiting the Cascade Waterfalls or enjoying a round of golf.

Hideaway Island Resort offers 6 styles of accommodation, ranging from a one bedroom ocean side villa with private pool to quad share dormitories with shared facilities.

The One Bedroom Oceanside Villa with Private Pool sits on low bank waterfront. Designed to take fulladvantage of the magnificent ocean views, the air-conditione

d villa features a combined living, dining and kitchen area, TV with DVD/CD player and wireless internet. The upstairs bedroom has a canopy four poster bed and French doors opening to an outdoor deck with an expansive view overlooking the pool and ocean. The ensuite has a corner Jacuzzi overlooking the ocean. French doors open to a tiled patio and a private swimming pool, lawn and patio area. Private stairs lead to a sandy sitting area and beach.

There are eleven free standing One Bedroom Oceanfront Bungalows with spectacular views of Mele Bay whilst two Attached One Bedroom Oceanfront Bungalows share a common wall with a home on the island. Both bungalow categories are constructed in traditional Melanesian style with private en-suite, bar fridge, tea and coffee making facilities plus private veranda with outdoor furniture and double hammock.

The six Twin Share Rooms are located next to the beach in a lodge style building surrounded by a wide wrap around verandah. The fan cooled rooms come equipped with a bar fridge, clothes cupboard and hand basin. Separate shower and toilet facilities are near by, connected by a covered walkway. These rooms are ideal for the budget conscious traveller who would prefer a little bit more privacy than the standard dormitory. 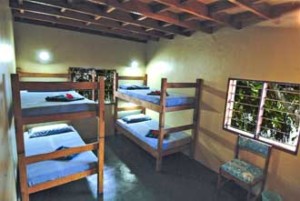 The Quad Share Dormitory has 6 rooms each with ceiling fan, two bunk beds, individual bunk lights, power outlet and clothes closet and lockers. The upstairs central communal area provides guests with an inside lounge area with computer with internet connection, cable TV and a variety of games for your enjoyment and an outside seating. There are separate male and female changing / bathroom facilities each with two showers, three toilets and two wash basins.

Hideaway Island has it’s own resident dive operator and caters for divers of all proficiency levels, from novice to the most experienced. Dives can be done straight off the beach.

The waters around Hideaway have been declared a Marine Sanctuary. The extensive protected reefs are full of colourful sponges, hard corals, sea anemones, gorgonian fans and an amazing number of tropical fish; including Jack the resident triggerfish. Consistently clear waters and prolific marine life make this one of the great dive areas of the South Pacific.

This dive was discovered New Year’s Day 2004 (by the boys) on a post New Year’s Eve revival exploration dive. The reef is spectacularly colourful and sits in beautifically clear water featuring an abundance of large intact table corals, clams, sponges, clusters of multi coloured Stag and Elkhorn corals and a variety of bright encrusting corals. There are numerous swim throughs with sunlight streaming through the cracks in the reef above reflecting light off the white sandy bottom. Max depth: 20 metres

Not only is there a magnificent array of intact plates that will rival any place in the world for colour and condition, but, as the name suggests, there is a huge anemone the size of a family car as well. The vast arrays of different varieties of resident clown fish are an added bonus. The dive starts in just 6 meters of water so good buoyancy is a must. A wonderful dive, and very popular amongst photographers and divers alike. A small tug boat named Bonzer was sunk near Clown Colony in 2001. Bonzer sits upright in 24 metres of water and is a good wreck for experienced and novice wreck divers alike, featuring easy swim-throughs 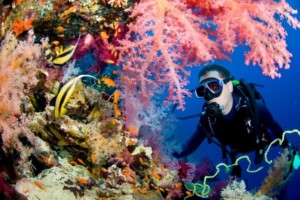 A very colourful coral area like a well-cultivated garden fit for royalty. Plate, stag horn and lace coral cascade along the side of the reef amongst others in a plethora of colour and shapes. A great photography dive. A hot spring bubbling up from the ocean floor provides something different. Max Depth: 18m.

Named for the resident batfish that meet you on arrival, Gotham City is a sea mound where the batfish are the jokers!! Have no fear, both adults and juveniles will accompany you through the whole dive pestering you for a feed and posing to have their photos taken. It’s not uncommon to see reef sharks and barracuda schooling around this area, which, together with some enormous plate corals and the occasional manta ray and large yellow fin tuna cruising through, make this dive well worth a look. Max depth: 25 metres 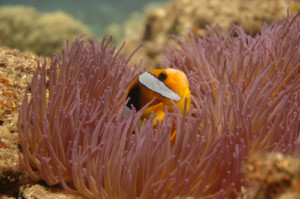 Aside from absolutely exquisite coral formations and oodles of reef fish, this site also plays host to some very rare anemones. Exciting enough is a blue tipped specimen with resident clownfish, but without doubt, the piece de resistance is another anemone just around the corner. A deep red in the summer, it turns an almost fluorescent pink during the winter months. If that’s not enough, there’s also a stunning wall on this site featuring masses of hard coral plates and stag horns, as well as a vast array of fish life. Max depth: 25 metres.

The MV Aloara, a 30 metre retired island trader was successfully sunk in 2001 close to the very popular snorkeling and dive site “Coral Gardens”. She now lies on her starboard side in 26 metres of water an can be penetrated by experienced divers. The new wreck has been very popular with divers since the sinking and already schools of fish are moving into their new home.